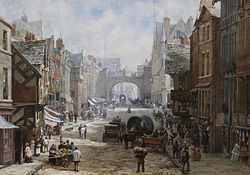 Evenhold, commonly referred to simply as the village or town, and sometimes "Eamon Town", is a settlement in the Kingdom of Evenhold on the world of Eamon where the Main Hall of the Guild of Free Adventurers is located. Though seldom referred to by name, Eamon Town is the title used by some authors including Ken Nestle (Hogarth Castle) and Ed Kuypers (The Time Portal), while Pat Hurst (Buccaneer!) and Mike Ellis (Well of the Great Ones) refer to the city by name as Evenhold.

Rick Volberding's Graphics Main Hall, Little Green Software's Super Eamon, and Frank Black's Eamon Deluxe have all provided details of the town that lies beyond the walls of the Main Hall, adding new merchants, trainers, and other diversions for adventurers to experience. Some adventures also take place, in part, in or near the town.

The Eamon Deluxe manual states that the area known as the village, famous for the magical statue that stands its center, is a result of people moving close to the Main Hall specifically in order to profit from those who make a career as professional adventurers. This also indicates that both the village and the practice yard were likely constructed somewhat later than the rest of the hall, perhaps implying that the hall seen in Eamon Deluxe is one at a later point in time than that seen in the original Eamon.

The central statue is believed to have been erected by some of Eamon's few benevolent priests to remember those who have lost their lives adventuring. If an adventurer donates a small amount of gold at the statue, he may be rewarded with an improvement to one of his weapon's stats.

The following merchants operate in the village:

The Practice Yard or Practice Area is an area said to be constructed south of the village so that the sounds of weapons or magic training wouldn't disturb the villagers. At its center is an information booth where a mysterious man points out directions to the various trainers, and for a price will also occasionally reveal where some treasure is hidden.

The following merchants operate in the practice yard:

Evenhold is a port city and has docks where ships load and unload (Buccaneer!, Shippe of Fooles). It also has a Museum of Natural History located at the corner of First Street and Main Hall Avenue, as well as a university (Museum of Unnatural History) and a public library (Encounter: The Bookworm).

The town has a protective militia, with members including Commander Dirk and Lieutenant Gerard (The Forbidden City).

The town sits in a semi-forested area near the sea, with roads and paths leading off into many other areas of the kingdom and parts beyond. Major nearby features are Marewood Forest and the Zyphur River east of town.

Eamon Deluxe originally only provided graphical representations of the village and practice yard areas; however, during beta testing it was requested that a traditional text mode version be provided in the Vi compatibility mode, which led to full textual descriptions of the areas being written.

Eamon Deluxe also states that merchants outside the hall are not officially sanctioned by the guild, and that adventurers interact with them at their own risk.