A mimic is a shape-shifting monster that disguises itself as an inanimate object, and attacks the player when the player tries to inspect or open it. Its most common appearance is that of a treasure chest, though the mimic may take the form of other artifacts like doors or coffins.

Mimics are a staple of various Dungeons & Dragons adventures, having been introduced to that system by Gary Gygax in 1974. They were introduced to Eamon in The Beginners Cave and subsequently used again in other adventures.

The mimic is the prototypical example of the "disguised monster" artifact type which was introduced in Eamon Deluxe. The "disguised monster" is an artifact, with a reference to a corresponding monster. As soon as the player interacts with the artifact, the game removes the artifact from the room and inserts the monster in its place. Disguised monsters are not always traditional mimics; they are sometimes used to create other types of ambushes where a monster appears when the player tries to pick up an artifact. (e.g., the Obsidian Scroll Case in The Training Ground). 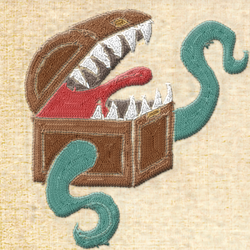 Appearances in other authors' adventures include:

"Barrel mimics" also appear in Super Eamon as one of the creatures adventurers can fight in the Training Arena.