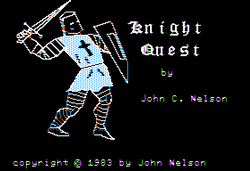 Knight Quest is an enhanced version of Eamon created by John Nelson in 1983. The system, which succeeded the earlier Eamon II created by Nelson with help from Bob Davis and Jon Heng, adds a number of features including many new magical spells and artifact types and support for professions, races, and languages.

All three were later converted into standard Eamon adventures. The system also has its own master which includes programs for players to create and manage their adventurers.

Nelson wrote many utilities for Knight Quest, a few of which were included on the master:

The second utility diskette is identified as "L.U.R.C. Maintenance" (named for "Language", "Useful", "Race", and "Class") and allows the user to add, remove, or edit items from lists used by the Knight Quest master: