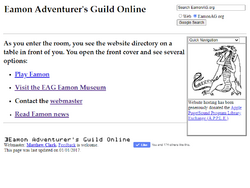 Launched 1 April 2003 at earthlink.net, the site moved on 22 November 2003 to its present location at eamonag.org where it is hosted by A.P.P.L.E. In November 2020 Call-A.P.P.L.E. editor Bill Martens assumed management of the website.

On 15 June 2004 Clark launched an accompanying blog at blogspot.com for sharing Eamon-related news and comments, leaving the main site largely for archives and game resources. The blog was most active from 2011 to 2013, with 46 posts in 2012 alone, but in recent years has seen only occasional updates. As of early 2022 the blog had 105 posts and 26 followers.

The Eamon Adventurer' Guild Online Facebook group (@EamonGuild) began on 3 April 2011 and as of early 2022 had about 100 posts, the majority of them cross-posts of items added to the blog. Artist Raquel Johnson created the group's banner artwork which was added in June 2012. The group has around 170 followers.