This article is about the fictional organization. For the planned game by Adora Entertainment, see The Eamon Guild of Free Adventurers. 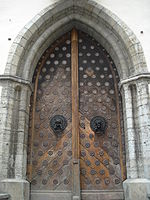 The entrance to the Great Guild Hall in Tallinn, Estonia.

The Guild of Free Adventurers, also known as the Free Adventurers Guild or the Adventurers Guild, is an organization of adventurers to which all player characters in The Wonderful World of Eamon belong. Headquartered at the Main Hall in Evenhold, the guild provides its members with opportunities for adventure, the services of various weapon and supply vendors, and access to areas like the Beginners Cave.

Membership to the guild is open to all comers, though applicants must be vetted and registered by the Burly Irishman before being admitted.

The guild operates from the Main Hall, a location that provides vendors, a bank, a bar, accommodations and other services for guild members. It also maintains several training areas for new members, including a beginners cave to the south, an alternate beginners cave to the east, and a beginners forest to the west. Activities for more experienced adventurers, including gladiatorial contests, are offered at the Temple of the Guild, situated far from the Main Hall.

An adventurer encountered in Castle of Doom is described as "wearing the colors of a member of the Guild of Free Adventurers," though the colors aren't specified.

The principle function of the guild seems to be to train, equip, and provide opportunities and residence for those engaged in adventuring. Most of the services provided in its hall cost money: buying equipment, learning spells, and (per A Runcible Cargo) renting rooms; however, some services do appear to be free of charge, such as training at beginner sites. No mention of membership fee is ever made.

The guild serves both as a consulting agency for adventurers seeking to perform specific tasks and as an information center for those seeking jobs, with various notice boards, papers, and even (as implied in The Citadel of Blood) magazines devoted to advertising interesting adventuring opportunities.

People seem able to contact the guild from a great distance to request the aid of adventurers, with such contacts sometimes coming from lands on Eamon or from worlds beyond (such as Earth or Middle Earth). This may suggest that Eamon's dimensional rifts are in some way controllable, perhaps by wizards such as the guild's Hokas Tokas who has often demonstrated an ability to magically transport people to and from other dimentions.

Guild events are documented in books known as the Record of the Minutes of the Free Adventurers, of which there are at least 56 volumes (Caverns of Lanst).

The Burly Irishman who checks in new guild members is presumably a member himself; the same may be true of various vendors like Hokas Tokas or Marcos Cavielli who operate within the guild's Main Hall. Other minor characters who perform tasks for the guild, including William Misslefire or the Warlord, may also be part of the organization. Vendors in the village and the practice yard, such as Grendel the weaponsmith or Schmitty the casino operator, are not members — Eamon Deluxe notes that they lack the "official guild seal of approval" and must be dealt with at adventurers' own risk.

Individual players have created an untold number of adventurers for their own use, most of which are unknown to the community. One exception is Sam, a strong and well-equipped adventurer now provided with most instances of the Eamon Master Diskette.

An artisan's guild operating in the nearby town of Hobnail Junction features in The Fugitive, and the opening of Pat Hurst's The Dark Brotherhood sees the hall of the Vintner's Guild in Evenhold collapse, killing dozens beneath its rubble. Nathan Segerlind's The Lair of Mr. Ed features a warlock wearing "a strange outfit resembling the Witches/Warlocks Guild uniform." The comment is made en passant and no further mention of this organization is made in the adventure. In The Sword of Inari the Magicians Guild detects the opening of a magical rift; they're also mentioned in The Prism of Shadows.

In Eamon Deluxe and Eamon Remastered, The Beginner's Forest is guarded by Zeus Hightower Flabbergibungander, a seasoned member of the Guild of Eamon Forest Rangers whose sign is three acorns.

Jim Jacobson's The Abductor's Quarters features an enemy bandit described as from "Frukendorf, a small town near the Main Hall where bandits rule." In The Jim Jacobson Adventures Deluxe, this description is updated by Frank Black to describe Frukendorf as the location of the Bandit Main Hall, which is "just like [the player's] Main Hall... except for renegade adventurers," suggesting the existence of a Bandit's Guild. This theme is further developed in A Runcible Cargo, with the Bandit's Guild playing the role of the primary antagonist.

The Phil Schulz adventure Eamon Renegade Club depicts a rival guild setup by disaffected members and tasks an adventurer with getting rid of them. It's unclear whether this is a response to hostile activity or a move to maintain a guild monopoly.

Similar or parallel versions of the guild exist in other worlds. The Guild of Free Rogues on the world of Diurla, introduced in CE Software's SwordThrust series, bears many of the same features and even members as the guild on Eamon. The evil parallel world of Zagora, described in Roger Pender's Rhadshur Warrior, has a dark and forbidding Main Hall occupied by the Guild of the Mystics, as well as guilds for assassins, slavers, and sorcerers.