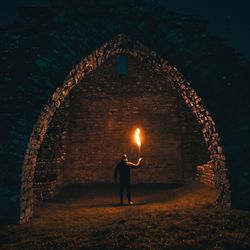 An adventurer is a character controlled by the player who serves as the protagonist in adventures. An adventurer, like player characters in other fantasy role-playing games such as Dungeons & Dragons, consists mostly of numerical representations of various skills and physical attributes; many of these are normally assigned at random, and some may improve through experience.

Adventurers in Eamon are members of the Guild of Free Adventurers and always leave from (and return to) the Main Hall in Evenhold when traveling. Other guild members sometimes appear as non-player characters in adventures.

An adventurer has more detailed stats and characteristics than those normally assigned to computer-controlled monsters, though unlike monsters the adventurer has no textual description. The following is the minimum data that normally comprises an adventurer record:

Some variants of Eamon record additional data about the adventurer, such as handedness.

Since players can create their characters in many different forms (man or woman, strong or weak, human or non-human), many specifics of the adventurer's life are necessarily vague and left to the player's imagination. Nevertheless, some personal details have been established by various authors over the years. The adventurer...

The adventurer also has many friends. Among them are...

Adventurers sometimes appear or are mentioned in published adventures:

Eamon distributions often include pre-existing adventurers; the best known of these may be Sam, a strong character frequently provided on Eamon master diskettes. John Nelson noted in the May 1985 newsletter that the club had been including a capable adventurer named Galahad on the Master Disk for a couple of years. 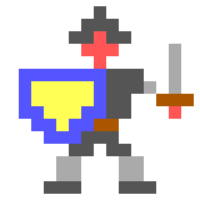 The Deluxe adventurer equipped with a weapon and armor.

Eamon Deluxe comes with a number of preexisting characters from whom the player can select when entering the Main Hall (or alter with the character editor), including the following:

Previous versions of the Eamon Deluxe Dungeon Designer had a character in its line-up by the name of Zombi Sam, a reference to the popular Sam character from the original Eamon master; this character is not present in the current version and his slot is now occupied by Stan.

Many people who play Eamon create their own characters, so the number of player-created adventurers generated over the years is likely very large. Visitors are invited to record their favorite adventurers below: