Sam Slicker is the Guild's officially sanctioned trader and buys any treasure, weapons or other items adventurers may bring back to the Main Hall.

After adventurers have passed the watchful eyes of the Knight Marshal and reduced their complement of weapons to the required four, they meet Sam Slicker under the "sign of three balls" where they may sell all their other items, treasure, and excess weapons. On some items Sam will give particularly charismatic adventurers a markup of five or ten percent, though for the majority, including weapons and all treasure items, there is a fixed price. Despite his ability to trade in everything from bars of gold, ancient statues, and light sabers to model trains and old Apple II computer parts, Sam is as the manual claims a shrewd businessman, and various other items (often parchments or keys) will be worth nothing. Cunning adventurers wanting to maximize their gain also know that Sam pays highly for unused healing potions.

Though Sam is the broker most adventurers encounter, other individuals occasionally inspect adventurers' loot. A Runcible Cargo — in which Sam is said to be away on business — implies that he has many other employees, as well as a large warehouse at the Main Hall and a number of carts to transport merchandise, possibly to the nearby Eamon Railroad.

Sam seems to be all business in the most critical sense, since he never chats to adventurers or takes time to haggle, neither has he been seen out adventuring. It is likely that the Guild's financial success mentioned in the Eamon Deluxe Manual which has resulted in the construction of the village and practice yard close to the Guild is mostly due to the efforts of Sam.

Where he actually sells all the things he acquires from adventurers is also not known, though given the various nearby towns, including the Eamon University, and the large number of religious orders, mages, and wealthy gentry found on he likely has no shortage of buyers. At times, Slicker arranges purchases within the Guild; Henry Haskell's adventure Lotto's Masterpiece is premised on Slicker's contracting the adventurer to retrieve a lost treasure which the Burly Irishman is looking to acquire.

Super Eamon gives a graphical depiction of Sam, showing him as light-haired and dressed in a green tunic. 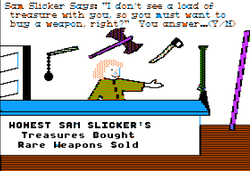 Sam and his shop as depicted in Super Eamon (1985)

Sam technically appears in nearly all adventures, but has rarely been seen in an adventure proper. In A Runcible Cargo his warehouse can be visited and his desk searched, provided adventurers can find his keys. In Adventure in Interzone, it is remarked that he bears a strong resemblance to "Big Bob," the merchant running the pawn shop in Interzone, suggesting they may be the same person or related; moreover, the character A.J., if he successfully survives the adventure, will travel to Eamon and gain employment as an assistant to Slicker. In Lotto's Masterpiece, Sam commissions the adventurer to find an ancient treasury of lost art on an uncharted island.