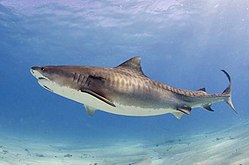 "The blood in the water has attracted a tiger shark..."

Leanda Atoll is a small coral island in the Malphigian Sea, mentioned by Pat Hurst in the Eamon Gazetteer and featured in his adventure Buccaneer!. Its position relative to the harbor at Evenhold is approximately 6 west and 12 south, expressed in Weyren Strides. Several species of shark prowl the waters around the island, including Tiger sharks, Makos, and Great Whites.

Near the center of the island is a village of grass huts where the native islanders live, fishing and hunting sea creatures with multi-pronged spears. Most bear tattoos and are part of a shark-worshiping cult led by a shaman.

A separate, tiny islet just past the atoll's westernmost point may be reached by wading through the shallow water on the submerged reef, though the profusion of sharks makes this dangerous. The islet has a single inhabitant, a hermit who lives in a shabby hut.