The Main Program (sometimes referred to by its Apple II filename, MAIN PGM) is the core game engine of Eamon. It contains all the game logic, such as the command parser, disk/database access, and all the commands. The Main Program is one of the three major programs that make up the Eamon game play experience, along with the Main Hall and the Leadin Program (the short program on most adventure disks which displays the adventure's intro text).

Version 6.2 was released in October 1987 by John Nelson. It features some bug fixes and speed improvements over version 6.0.

This version added a new feature: the ability to show the room exits before the command prompt. This feature is described in the June 1988 newsletter.

Many of the adventures based on version 6.2, such as Walled City of Darkness and Journey to Jotunheim, are heavily modified and often include some 7.0 features. 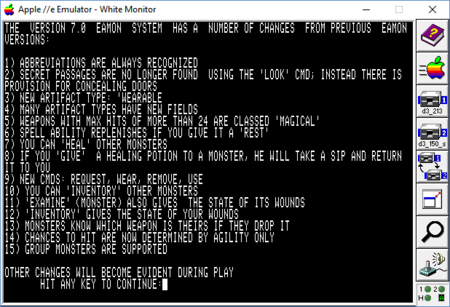 Screenshot of the opening screen of Demongate in an Apple II emulator, explaining the new features of Eamon 7.0

A 7.1 version of the Main Program was also released by Zuchowski.

This is a port of the Main Program to Microsoft BASIC by Frank Black, developed from 1997 through 2012. It runs on MS-DOS rather than the Apple II.

This is a web-based rewrite of the Eamon Main Program, written by Keith Dechant from 2016 onward.

Tom Zuchowski wrote what he described as a "tour" of the version 7.1 Main Program and published it serially in the September 1994, December 1994, March 1995, and June 1995 issues of the Eamon Adventurer's Guild Newsletter. The tour consisted of the complete code listing of the program, with textual annotations added to most lines explaining their operation and purpose. Matthew Clark later added the tour in its entirety to his website.