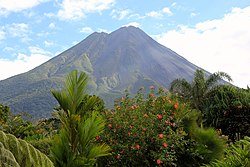 "You're on the crest of an old lava flow where you find a path south into a green valley. Beyond... is the volcanic cone." (Mount Arenal, Costa Rica)

Burning Rock is a volcanic island in the Malphigian Sea, mentioned by Pat Hurst in the Eamon Gazetteer and featured in his adventure Buccaneer!. Its position relative to the harbor at Evenhold is approximately 2 west and 5 south, expressed in Weyren Strides.

The southern and central parts of the small island are dominated by an active volcano from which smoke and steam often rise, and the island's beaches are composed mostly of basalt and black sand. The areas north of the mountain are a mix of hardened lava flows and lush forests of eucalyptus sloping gradually down to the northern shores, with at least one native human village situated on the volcano's northern slopes. The inhabitants live in stone huts and farm the surrounding tillable land, all of which is enclosed by wooden palisades. The people worship the demigod Moridai at a stone temple just above the village.

Large natural gemstone may be found on Burning Rock, which the natives wear as decorations.