The Eamon Gazetteer is a document created by Pat Hurst that lists important people, places, and artifacts in the the world of Eamon and provides background for the four adventures Hurst authored. It features a map of the area where the stories take place and also includes sections that describe Eamon's pantheon of deities and important artifacts. Part of the early draft of the gazetteer was included in the adventure Grunewalde, describing the Duchy of Grunewalde's populace, economy, and politics. Other adventures have incorporated Hurst's standardization: Well of the Great Ones by Mike Ellis—to which Hurst made a number of contributions—also maintained this continuity and elements were also employed in the Eamon Deluxe adventure A Runcible Cargo.

In print form, Hurst's gazetteer consists of two dot-matrix-printed, 8½-by-11-inch pages. Hurst provided a copy to Huw Williams in November 2013 for inclusion in the Eamon Wiki, and both the transcribed text and the original PDF file are provided below. 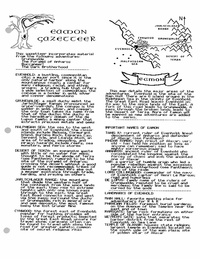