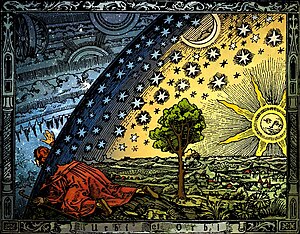 Eamon is magically connected to other worlds and dimensions. (Flammarion engraving, c. 1888.)

Eamon is an Earth-like planet in the Milky Way Galaxy that is the setting for most of the adventures in the Eamon series. Eamon was conceived by Donald Brown and first described in the Eamon Player's Manual.

Brown describes the planet of Eamon as occupying the exact center of a galaxy, which he identifies in the Eamon Player's Manual as our own Milky Way Galaxy.[1] Real-world astrophysicists believe a super-massive black hole named Sagittarius A lies at the center of the galaxy, a point roughly 27,200 light years from Earth, but Brown's description of Eamon as a magical place where the "laws of science itself" are twisted sets it outside the limitations of real science.

Brown also describes his uniquely-positioned world as orbiting no sun and instead being orbited by all the other suns of the galaxy, but adventure authors rarely observe this, depicting Eamon as more familiar and Earth-like with a single sun, regular periods of day and night, seasons, and years. The background at Eamon Remastered says Eamon is orbited by "two great suns". Eamon is also orbited by three moons which are all full at the same time on only one day out of the year, the Feast of Carroll.

In his article "Adventure Games: Problems, Solutions and Problems", author Paul Edwards writes that the planet is "near the sun called Eamon."

Eamon has a number of sizable continents, islands, oceans, and seas. Most adventures take place on the continent on which the Main Hall stands (identified in one adventure as "Grancasa"), with other parts of the world only occasionally seen or described. On the Main Hall continent are numerous kingdoms, including the unnamed kingdom where the adventurer lives and nearby nations like Nexdor and Rhyl, as well as wild and unexplored plains and mountain lands beyond.

The ecology of Eamon is a blend of familiar and fantastic species. Plants and animals from Earth are widespread: forests may contain oak, maple, and walnut trees, and animals like horses, cows, rats, chickens, and the like are common. The presence of terrestrial species on Eamon is unexplained, but follows a tradition of grounding fantasy worlds with real detail. With these common species are many stranger creatures like dragons, goblins, and mimics. It's unclear if the species on Eamon are native to the planet or were introduced to it, perhaps through Eamon's frequent dimensional rifts, but exhibits in Eamon's Museum of Natural History suggest that at least some of the planet's species are native.

Magic is a natural phenomenon on Eamon, described by Brown as deriving from strange and powerful forces exerted on the planet due to its position at the center of the galaxy.

Main article: History of the world of Eamon

Eamon has a long and rich history, pieces of which are occasionally revealed by various adventure authors. Accounts offer glimpses of the world's creation, the rise and fall of mighty empires and rulers, recent events surrounding the adventurer, and even possible distant futures.

Eamon's culture loosely parallels that of Medieval Europe, with kingdoms, knights, and orders of nobility such as duke, baron, and count, and to an extent seems directly tied to it as suggested by the presence on Eamon of real-world nationalities (notably the burly Irishman).