Vito the Thug is a character created (though not named) by Donald Brown who appears on the Eamon Master, relaxing in the outer chamber of the Guild's Main Hall and drinking beer with his friends. He stabs any adventurer who doesn't obey the instruction to check in with the Burly Irishman at his desk:

As you go over to the men, you feel a sword being thrust through your back and you hear someone say, "You really must learn to follow directions!" 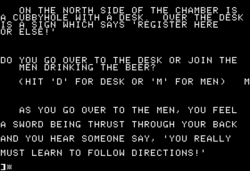 An adventurer meets an untimely end

Frank Black gives the character a name in Fiends of Eamon, showing him waiting in the coat room off the Abductor's ballroom:

You see the guy who used to have the job of stabbing people in the back for not signing in at the Main Hall until he was fired for trying to stab the Irishman. Right now he is busy stealing things from peoples' coat pockets.

Vito also meets adventurers returning to the Main Hall from Robert Parker's Revenge of the Bookworm and checks to make sure they don't enter with more than four weapons (a task more often performed by William Misslefire). The adventure notes that he operates Vito's Pawn Shop and depicts him as having an Italian accent.