The Temple of Dread

The Temple of Dread is an independent adventure written by Frank Black and first published in Softdisk 150. 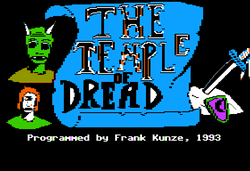 The game's introduction takes the form of a short letter to the adventurer describing the mission:

"Welcome, brave adventurer. Our village of Griffinville has suffered many a blow from robbers and bandits. The situation has grown dire. Only a small handful of food and supplies has been able to reach us.

"It is said that the bandits are led by a mysterious Wizard and that his armies dwell within a ruined temple five days to the north.

"Our finest fighters, led by a strong Swordsman named Thanos, set out to explore this temple and never returned...

"We have heard of your heroic deeds and now that you have arrived we once again have hope. Every day the situation grows worse.

"Go to Blackhawk's and buy supplies. We will give you 450 coins and tomorrow our guides will take you to the temple to begin your quest. Farewell, and the best of luck."

Before embarking on the adventure, be sure to visit Blackhawke's Armoury to buy weapons, armor, and supplies. Having a torch and/or lantern is vital, as is a tinderbox to light them with, and the mirror will serve a specific purpose.

Also be sure to familiarize yourself with the game's commands. Like those in most Eamon adventures they may be abbreviated, and if you enter a command the game doesn't understand it will list them all for you. Black describes the commands in detail in his documentation, but briefly they are:

Doors and items are sometimes hidden but searching a room will reveal them. Many doors in the temple and dungeons are also locked, but every one is passable either by picking the lock or just breaking it down. Being able to successfully pick a lock comes only with experience, so in most cases it's simplest just to smash your way through wherever possible.

The adventure is laid out in three distinct areas: the temple where you begin and two sprawling dungeons below. 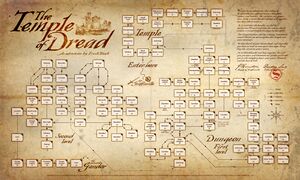 A map of the temple and its dungeons.

You begin at the temple's main entrance with heavy doors east and west.

The game's epilogue varies depending on the companions who are with you at the end. Though Oremm accompanies you as a friend, he remains loyal to Gandor and during the final encounter will kill Tiffany (if present) and attempt to kill you, forcing you to strike him down. If he's absent, Tiffany survives and returns with you to Griffinville. Thanos if present will will be struck by the wizard's magic missile but will also survive and return with you.