The "Burly Irishman" is a character in the Main Hall who serves as the receptionist and records-keeper for the Guild of Free Adventurers.

Role in the guild

Players encounter the burly Irishman in the Eamon master when creating a new character or returning with an existing one. The Irishman, who sits at a desk in a cubbyhole in the hall's outer chamber, solicits the adventurer's name; if he finds it in his book, he grants him access to the hall; if not, he treats him as a new recruit, providing the adventurer's basic attributes and some further instructions before granting him entrance to the members' area of the hall.

In Eamon Deluxe, the Irishman can return characters to the hall who are out on adventures through the use of a little magic, a lot of smoke, and a good few wallops to the side of the head to focus the disorientated adventurer back on where he or she is. Unlike the Irishman's other function, such a return costs money, though he waves the fee for destitute adventurers.

The Irishman isn't known to go on adventures, but the introductions of a couple of adventures do suggest that he is fairly active around the hall and is the go-to man for adventurers wanting information. In Camp Eamon, when an evil (and rather confused) group of Nazis attacks the guild and steals the floor plans to the hall, they also capture various important Eamon personalities including the "burly Irishman". He is also mentioned in the introduction to The Lair of Mr. Ed as someone the adventurer asks when a close friend is kidnapped by the villainous talking horse. 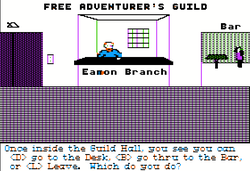 The Irishman as depicted in the Super Eamon Main Hall

Lotto's Masterpiece suggests that The Irishman has some interests outside his guild work: he commissions Sam Slicker to obtain an ancient golden statue for him from a lost civilization, and Slicker in turn commissions the adventurer to retrieve it, though why the Irishman wants the statue is not clear. It is also uncertain why the Irishman doesn't commission an adventurer in person, though if his various grumblings about adventurers are true it's possible he feels none of the Main Hall regulars are up to the task.

The Irishman provides information during the Eamon Deluxe adventure Stronghold of Kahr-Dur by Derek Jeter, where he receives a grim message by raven from the distant town of Fahrnor, giving details of the activities of an evil necromancer. This also suggests that in addition to his other duties the Irishman handles the guild's correspondence.

The Irishman also shows up in reviews, tutorials, and other Eamon-related material to provide some in-character (if rather fourth-wall-breaking) tips. In Nathan Segerlind's review of the new Eamon 7.0 designer, for instance, the Irishman appears with his pal the Moleman from John Nelson's adventures to discuss the program. He can also be found on this wiki dispensing tips to first-time editors.

A monster described as a "burly Irishman" appears in The Ruins of Belfast by David Sparks, but the author doesn't say this is the same character as the one from the Main Hall. 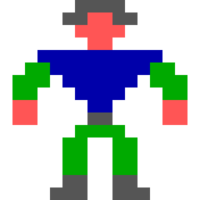 The Irishman in Eamon Deluxe

The "burly Irishman" is the archetype of the put-upon bureaucrat, often muttering imprecations or complaints about his career, and is frequently gruff with new recruits. Though ostensibly Irish, the character's accent sometimes wanders: wishing goodbye to adventurers, he says, "y'all come back real soon, ya heah?"

In Lotto's Masterpiece, Sam Slicker reveals that the Irishman is an art enthusiast whose research led to the rediscovery of the ancient art treasury of Ervuol. In A Runcible Cargo, the Irishman's overturned desk can be looted, revealing correspondence between him and "Eowyn Fleiss," identifying the Irishman as a "valued client" of the the House of Ill Repute. Super Eamon depicts the Irishman with orange hair and an orange beard, dressed in a blue shirt. Eamon Deluxe adds green sleeves and pants, but omits the ginger hair.

The Burly Irishman's Outfitters is a supplies shop that operates in Behlos City (The Treachery of Zorag).

Eamon Master 1.1 added an entire new routine and an associated text file called SNAPPY to allow the Irishman to serve up more varied insults and complaints to new adventurers. Responding to the Irishman's request for a name prompts one of the following replies:

The Atari ST port of Eamon includes the additional lines:

Jon Walker's port of Eamon for the PC adds the line: