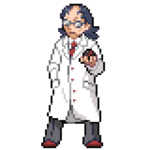 Professor Larkspur first appears in Museum of Unnatural History (1985) by Rick Volberding when the plans for his new invention, the Interdimensional Translocator, are stolen by his assistant Yrn Zandro and used to teleport the Museum of Natural History in Evenhold to a different dimension. He asks to translocate the adventurer to the missing museum in order to stop Zandro's evil plans and return the building and its contents. Volberding identifies Larkspur as a physicist and describes him as short and stooped.

Larkspur reappears in the A Runcible Cargo (2012) by Thomas Ferguson working as a tenured archaeological researcher, supported by Eamon University and the Eamon Natural History Museum. At a dig site west of the nearby town of Dodge, he and his team uncover artifacts from the ancient Eruvolian civilization including a particularly strange and powerful item that he dubs the "Runcible Cargo".

Larkspur's office is on the second floor of the Department of Archaeology (College of Physical Sciences and Necromancy) at Eamon University in Mudville.