The Heart of Gold

The Heart of Gold is an Eamon adventure by Frank Black released in June 1997, distinctive for its small size (15 rooms), complex puzzles and effects, and complete lack of physical combat. The story features characters and settings from The Hitchhiker's Guide to the Galaxy science fiction series by Douglas Adams, and draws inspiration from the popular Hitchhiker's Guide text adventure game published by Infocom in 1984, relying on the player to investigate their surroundings and attempt various interactions with characters and objects to progress through the story.

In Adams's original Hitchhiker's Guide, alien ships demolish Earth to make way for a hyperspace bypass and only the alien Ford Prefect and his human friend Arthur Dent escape by secretly teleporting onto one of the craft. Black's Heart of Gold starts similarly, with ships destroying the world of Eamon and Ford escaping at the last moment along with the player's character.

Several years ago a stranger named "Ford Prefect" appeared at the Main Hall. He employed himself as an actor and you became friends with him. He seemed like a good chap, if a bit odd. He was known to stare at the sky for long periods of time, claiming to be looking for "flying saucers". This was always taken as a joke and he would laugh with everybody at it and order a round of Double Dragon Blombs.

Then one day a green shape appeared in the sky. A voice boomed out of it saying that planet Eamon was in the way of the new "hyperspace bypass" and was going to promptly be destroyed in 2 minutes. Panic broke out and a mob of brave adventurers ran out to challenge the green "spaceship".

Ford suddenly pulled you aside. "Another ship has appeared!" he said excitedly, "I'm trying to hitch a ride. Don't worry, I'm bringing you with me!" Of course, you have no idea what he is talking about and ignore him.

"I've succeeded!" he suddenly yells with joy. "Prepare to be transported..."

You feel a gut-wrenching sensation and black out. Somewhere off in the distance, you hear the world of Eamon being completely destroyed!

Unlike in Adams's story, the ship that Ford and the adventurer escape on is not one of the Vogon constructor ships but is the titular Heart of Gold, an advanced vessel equipped with a unique form of propulsion known as the Infinite Improbability Drive that can cause extremely unlikely events to occur. The story begins in the ship's baggage compartment. 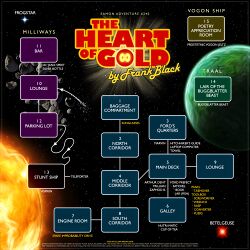 Note: Never attempt to flee; doing so causes a rip in spacetime that throws you to Ford Prefect's home world of Betelgeuse VII just as it's being destroyed.

Part 1: The Heart of Gold

Part 3: Traal and beyond

With the enemies dead, you and Ford free yourselves and use the ship's time travel equipment to journey a few days back in time. Ford then uses the Vogon computer to access the Galactic Hyperspace Planning Council records and rescind the orders for Eamon's demolition, then transports you safely home, promising Eamon will never face demolition again.

Tom Zuchowski, reviewing The Heart of Gold in the June 1997 issue of the Eamon Adventurer's Guild Newsletter, gave the adventure a lukewarm rating of 6.5, praising it as a "technical masterpiece" but criticizing its high degree of difficulty. Zuchowski felt that it would be nearly impossible for most players to solve the game's puzzles without the use of the hints Black provided, and even with them found it challenging to complete the adventure. He applauded Black's execution, saying that it worked flawlessly in both 40- and 80-column modes, and recommended the game for "serious puzzle junkies". 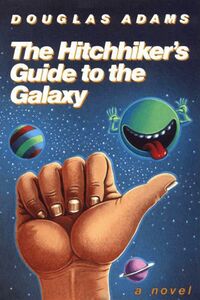 As in Adam's original works, the story in Heart of Gold spans vast distances of time and space in the Milky Way Galaxy and moves quickly through numerous settings: Eamon, where the story begins and ends; the Heart of Gold spaceship; Milliways restaurant situated at the end of time on the remains of Frogstar World B; Hotblack Desiato's stunt spaceship; the jungle world of Traal; an interstellar zoo; and the interior of a Vogon spaceship. The adventurer may also briefly visit the doomed world of Betelgeuse VII.