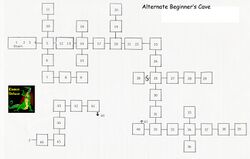 When converting the adventure to Eamon Deluxe format, Frank Black did not alter any of the content, however he did insert some extra object descriptions, particularly for dead boddies.

The adventure gained an overall rating of 5.6 from the National Eamon User's Club, and Tom Zuchowski awarded it a 5. Zuchowski described it as an adequate adventure for young Eamonauts and first-time players, and a good job considering the target audience. Luke Hewitt in his review of the adventure in Eamon Deluxe awarded the Alternate Beginners Cave a 6 and praised its style, though he was disappointed at the fact that the adventure finished in a fortress at a door welded shut.

The Alternate Beginners Cave has no intro text except for a title page bearing a skull, and neither does William Misslefire appear to guard the way against adventurers being too strong to enter. It is also the only beginner adventure not to mention the Warlord, though there is a "beginners cave" sign at the entrance and the cave is still described by later authors to be east of the Main Hall. Since a battered warning notice can be seen in the second room, it is possible that the cave is an area which used to be used for guild training but isn't any longer due to excessive danger and a high mortality rate among adventurers.