The Lair of the Minotaur

The Lair of the Minotaur is an early Eamon adventure written by Donald Brown.

This is the second Eamon adventure and the first outing not explicitly meant for beginners. It was released probably in late 1979, with or shortly after the debut of the Eamon system itself, and is the first to include features such as buried items and locked doors.

You've arranged to meet your girlfriend Larcenous Lil (or in the case of a female adventurer, your boyfriend Slippery Sven) in the town of Dunderhaven. When you get to town you learn that Lil, who arrived before you flat broke, tried to get some cash by burglarizing a nearby castle and hasn't been seen since.

You go to the castle after her, but once inside you're ambushed by bowmen under the command an ugly man on a throne who takes you for another thief and casts you down a shaft to meet the same fate as Lil. After a long drop and a "thud", you find yourself unhurt but with no way to climb back up the shaft, and so must venture into the tunnels beneath the castle. 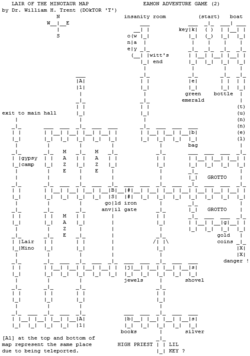 The Eamon Adventurer's Guild reports a rating for the adventure of 4.5 out of 10, the average of six ratings. Reviewer Tom Zuchowski gives Lair a rating of 5, describing it as an "advanced Beginners Cave" and a "pretty good second adventure."

This adventure begins in the town of Dunderhaven but ends just outside the Main Hall, the intervening distance being covered entirely on foot or by relatively short trips in a boat, all leading generally south. This likely places Dunderhaven a short distance north of Eamon Town.

The river in this adventure is not explicitly named but occupies the same relative location (within walking distance of the Main Hall) and flows in the same direction (south/southeast) as the Zyphur River featured in The Zyphur Riverventure, an early Eamon story created by Jim Jacobson.