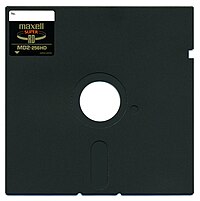 A disk, also called a floppy disk or diskette, is a data storage medium consisting of a flexible magnetic disk inside a semi-flexible square plastic enclosure. Data on the diskette is written and read with a floppy disk drive.

Eamon, developed by Donald Brown for the Apple II in the late 1970s, was originally saved on 5¼-inch floppy disks and the great majority of subsequent adventures or enhancements to the system were shared and distributed on such media in either Apple DOS 3.3 or ProDOS formats. The capacity of a double-density 5¼-inch disk was 140 kilobytes — 35 tracks per side, 16 sectors per track, and 256 bytes per sector. This storage constraint was a limiting factor on the size and complexity of early adventures, and more involved adventures sometimes extended over two or more disks.

By the 1990s the more compact and higher-capacity 3½-inch disk had eclipsed the 5¼ to become the dominant portable storage medium. However, though some Eamon-related adventures were developed for this or other subsequent media, most continued to be developed in a way that was compatible with the original programs and disk constraints, even well into the 21st century. The most recent original adventures have been developed for use with the non-diskette-based Eamon Deluxe.

Data on old diskettes can be preserved by converting it to a file format suitable for use by a modern emulator. Apple II diskettes are often converted to .DSK format which AppleWin and other Apple emulators can use. Most Eamon resources are now preserved and distributed as .DSK files.