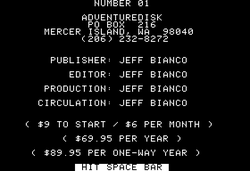 The introductory menu of issue 1.

AdventureDisk was a monthly, diskette-based newsletter devoted to adventure and role-playing games for the Apple II computer, and also acted as a distributor of Eamon adventures in the mid-1980s. Each issue of the newsletter diskette included a free Eamon adventure and was accompanied by a hard copy "AdventureBook" with maps and tips for solving games. It was created and operated by Jeff Bianco. 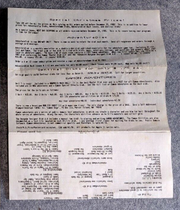 In correspondence with Huw Williams in January 2014, Bianco recalled that he first began collecting adventures in 1981 or 1982 at the age of 13 or 14, and ultimately gathered over 120 adventures which he would copy on his Apple IIe and sell by mail order along with an 8.5x11-inch sheet (later an 8.5x14-inch sheet) listing them all. Bianco charged a couple of dollars apiece, but also sold larger bundles with better values.

Bianco began AdventureDisk in spring 1984 and managed it from his home in Mercer Island, Washington, advertising it in computer magazines to help grow his circulation. The project ran for about 10-15 issues, each of which would include a free Eamon adventure along with other content like maps or tips for solving games. A mid-1985 review by QuestBusters noted that subscriptions were $6/month or $69.95/year. In December 1985, it reported that AdventureDisk had compiled many of the best public domain text adventures for sale on three "AdventureGame" diskettes; the first volume contained Donald Brown's "Star Wars Adventure", Ragnar Fyri's Ula Tor, and several others.

Bianco was assisted by a talented programmer, also in his early teens, who designed the disks' menu interface and helped create some of the content; Bianco never met him in person and in later years could not recall his name.

Jeff Bianco estimates that he published maybe 10 to 15 issues of AdventureDisk; an ad sheet from late 1985 lists 12. The first issue is available in its entirety at archive.org; incomplete summaries from scattered sources describe some of the subsequent issues.

In addition to the regular newsletter disks, Bianco compiled hints and walkthroughs into collections called "Tip Disks" which he sold for $9.95 apiece, and which featured printer support, font selection, music. A review in the July 1985 issue of QuestBusters describes the three available volumes: