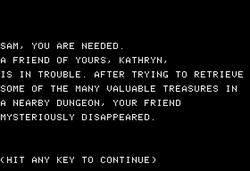 Kathryn's disappearance in the introduction to The Abductor's Quarters

Kathryn, also spelled Katharyn, is a friend of the adventurer and a recurring character who features in multiple Eamon adventures.

Kathryn first features in The Abductor's Quarters by Jim Jacobson when she disappears while trying to retrieve some treasure from a nearby dungeon (suggesting she's likely a fellow member of the Guild). Kidnapped by the titular Abductor, the adventurer frees her from the dungeon and returns her to safety. Jacobson describes her as "a friend of yours", and when located in the Abductor's treasure vault describes her only as "tired but alive".

Katharyn reappears in Quest for Marron by John Nelson, described as "a very good friend" and now the subject of demonic possession. The adventurer binds Katharyn with chains, puts her into a canvas bag, and carries her to the caves of Mount Sunis to have her exorcised by the holy man Marron.

Frank Black who adapted the adventures for Eamon Deluxe added his own humorous description of Kathryn to his version of The Abductor's Quarters: "A woman clad in a sleazy black dress. She dusts herself off and says, 'I have to pay better attention when people talk, I thought they said this was the "Seductor's" dungeon!'"