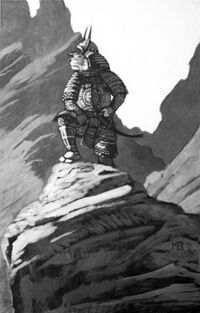 Samurai Cat is a fictional character created by artist and author Mark E. Rogers (1952–2014) whose exploits are the basis for multiple Eamon adventures written by Nathan Segerlind.

Samurai Cat, also known as Miaowara Tomokato, is the most skilled and accomplished warrior in the service of Oda Nobunaga, a Japanese warlord who taught Samurai Cat to perform the three devastating Sword Blows of Death: the Deflecting Blow, the Scarlet-Tapeworm, and the Whirling Outboard Motor Propeller Blow. Wielding his katana and performing his fearsome combat moves, Samurai Cat is nearly invincible and successfully overcomes many of Nobunaga's enemies on the battlefield. However, while Samurai Cat is away on a short vacation to visit his brother, an alliance of villains from across time and space stage a massive assault on Nobunaga's home, Azuchi Castle, and succeed in assassinating the shogun. Samurai Cat swears to avenge his master's death and begins a long quest of vengeance that takes him to many strange and far-flung locations all over Earth and beyond.

Each of Rogers' Samurai Cat stories is a parody of some famous fictional, historical, or mythological event and sees the hero using his fighting prowess to overcome all kinds of fantastical obstacles, from Norse gods to land-traversing battleships. Segerlind's adaptations of these stories are very true to the source material, in each case faithfully reproducing the great majority of the plot, setting, and characters. The adventurers in these stories implicitly assume the role of Samurai Cat.

Other adventures by Segerlind that feature themes and characters from the stories: