The Kingdom of Evenhold, usually unnamed in Eamon adventures, is the kingdom in which the Main Hall and surrounding areas lie and is one of many kingdoms and lands on the world of Eamon. It is ruled by a king whose castle is in or near the principle town of Evenhold (also known as Eamon Town). Many adventures take place in the kingdom and are often undertaken to protect the realm against enemies.

Most adventure authors refer to the land simply as "the kingdom" or "our kingdom". Roger Pender in Rhadshur Warrior identifies it as "the Kingdom of Eamon", though given that the kingdom is only one of many in the world, that name may not be its true one. Naming the kingdom in the fashion of a city-state might yield "Kingdom of Evenhold", though this is merely speculation. 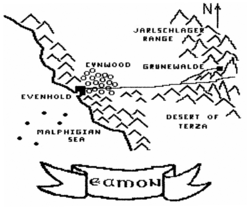 Regional map from the Eamon Gazetteer

The kingdom is sizable and is divided into various provinces and shires. One named province is Baronia (Expedition to the Darkwoods), an area situated around a town of the same name about nine days' travel from the Main Hall; another is Darland (In the Clutches of Torrik), a province administered by a short-tempered governor.

Among the shires, one contains the Main Hall and is ruled by a shire lord (Lifequest); another is Duneshire, probably south of the Main Hall (Hogarth Castle). A shire tax is sometimes levied on the booty returned from adventures (Eamon S.A.R.-1).

Evenhold, also known as "Eamon Town", is the kingdom's main settlement, often referred to as a town or village but sometimes described as a city. Other settlements include the towns of Dunderhaven (The Lair of the Minotaur), Hogarth Town (Hogarth Castle), Sloborough (Revenge of the Mole Man), Yomber (Escape from Mansi Island), Baronia (Expedition to the Darkwoods), Oigres (Attack of the Kretons), Belbury (Firestorm), and others.

The King rules from his royal palace, situated in or near Evenhold. Beneath him are various ranks of nobility such as dukes, barons, and others who serve as provincial governors, shire lords, and the like. Towns also have mayors (Black Mountain) and sometimes ruling councils (Quest of the Crystal Wand). The king himself may have a council and is served by various officials, a number of whom were at one point kidnapped and rescued (The Rescue Mission).

The Senator's Chambers suggests the kingdom may also have a deliberative government assembly.

Relations with other kingdoms

The kingdom is on friendly terms with King Mahn, the ruler of another land (The Quest for Trezore). The Kingdom of Nexdor may also be an ally, given the king's commissioning of a mission to rescue the daughter or Nexdor's ruler (The Caves of Mondamen).

The kingdom has more uneasy relations with the Northern Reaches, averting a disastrous conflict only through the marriage of Princess Aeriel to its barbarous ruler (The Halls of the Adept). It's also been at war for many years with the Sicilians (Search for Mack).