The Ring of Doom

The Ring of Doom is an Eamon adventure written by Sam Ruby based on characters and settings from the works of J. R. R. Tolkien, and is the third story in Ruby's three-part Lord of the Rings series. The adventure was released in June 1986 and continues the story from the previous Mines of Moria and Forest of Fear.

Ages ago, in times few remembered, the Dark Lord, Sauron, fashioned Rings of Power in his land of Mordor. One he made for himself, and it was the mightiest, for it could control the others. In all, twenty rings were made. An old poem tells how Sauron distributed them:

The Elves were not tricked by Sauron's false friendship, so they hid their rings. Sauron has taken back the seven of the Dwarves. The nine are used by the Black Riders, the Nazgul, who are Sauron's powerful servants. But the one was lost.

Lost, that is, until now. The one has been found, by the "good guys", fortunately, for if Sauron recovers it he will be invincible!

Being a mighty warrior and hero of the land, you are summoned to a council of the wise and the leaders of the free peoples. A debate occurs over the question, "What should we do with the ring?"

The leader of the council, Elrond Half-Elven, after a long debate, says, "There is only one way. We must destroy it. Doing that will destroy Sauron. It must be thrown into the Mountain of Fire, Orodruin (also called the Mountain of Doom). However, Mount Doom lies in the land of Mordor — where Sauron dwells."

"What?", says someone, "take it right under his nose?? Nonsense!"

"Perhaps," says Elrond, "but it is our only hope."

You volunteer to be the ringbearer. You must go through a mountain pass called Cirith Ungol and into Mordor. There you will throw the ring into the fire of the mountain. You are given some lembas, an elvish waybread, the shards of a once mighty sword, and a flask of a magical liquid. (Examine them for further information.)

You journey south until you reach the jungle-forest of southern Ithilien. 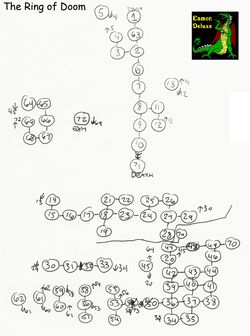