Return of Ngurct is an Eamon adventure written by Hoyle Purvis and released in December 1991. The story is a sequel to The Temple of Ngurct created by the Plamondon brothers in 1982.

The story begins some time after the adventurer's earlier mission to the citadel, which ended successfully with the apparent destruction of the demon Ngurct's golden medallion:

The king contacts you with a problem.

Once again, travelers and people in the area of the old ruined citadel are being attacked by odd creatures and strange robed figures.

You had thought the demon exiled from the earth with the destruction of the medallion. The pieces of it were given to Osborne to scatter.

Could someone have reconstructed the medallion?

The king wants you to take a look into the situation.

To help you, he has sent runners to find and enlist the aid of those who helped you fight Ngurct before.

This time the king wants you to wipe out the cult members, recover the reconstructed medallion, & destroy the demon Ngurct.

The king will give you 5,000 gold pieces upon the successful completion of your task.

You travel to the mountain pass and arrive at the entrance to the citadel.

Though the cult has done some repairs and remodeling since your last visit, the basic arrangement of the citadel and its environs has changed very little since Temple of Ngurct and most of the rooms and connections are similar. As in the original, there is an above-ground portion consisting of the citadel, towers, and guard chambers, and a below-ground portion accessible from the east tower.

Note that many opponents like orcs, goblins, ogres, and robed figures will appear at random locations throughout the adventure. Most carry little more than a weapon, but one — Trok the troll — will drop a key when defeated. Friends and allies mostly wait for you in fixed locations; a few, like Joubert and Laurie, wander. 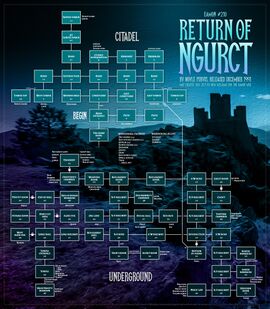 Go back to the main entrance and depart south to the Main Hall.

Reviewer Tom Zuchowski describes Return of Ngurct as "solidly crafted with a good map and few errors" and says it's likely to please players who enjoy "hack'n'slash"-style adventures. He describes some of the combat as very intense, but notes that the large number of companions, monsters, and artifacts can make for lengthy lists that get tiresome to wade through. Zuchowski gave the adventure a difficulty rating of seven.