The Quest for the Holy Grail

Not to be confused with Monty Python and the Holy Grail.

The Quest for the Holy Grail is an Eamon adventure written by Evan Hodson.

In keeping with the source material — the 1975 British comedy film Monty Python and the Holy Grail — the game is set in Medieval England and features God issuing a quest to the adventurer to find the legendary Holy Grail, via an introduction frequently interrupted by digressions about moose and plagued by changes in writing staff.

The Quest for the Holy Grail
A sudden darkness with howling winds sweeps over you and when it passes, you find yourself in England, 926 A.D. — the time of King Arthur.
(Hit any key to continue)

Without warning, the heavens part and a blinding light envelops you and a deep bass voice appropriate for a scene of divine revelation such as this says to you, "Your quest is to find the Holy Grail, most noble knight!"
(Hit any key to continue)

Nejinkem Bjorn Borg yae posten! Sweden is most pleasant to visit in the summer when the flowers bloom in the sunshine, although you must watch out for mooses that roam wild. A moose once bit my sister Ilsa!
(Pont ven clobsorgneh yerfossen)

The voice continues, "You will face the many deadly perils that lie ahead, but you will also have many allies, such as Sir Launcelot the Brave, Sir Galahad the Pure, Sir Robin the Not-Quite-So-Brave-As-Sir-Launcelot and the rather aptly-named Sir Not-Appearing-In-This-Adventure."
(Hit any key to continue)

No really! She was training the moose to mix concrete and to fill out complex insurance forms when it just hauled off and bit her! Yumpin' yimminy, de moose been taking over everything! I cannot take a bath without six or seven mooses jumping in with me!!
(Pont ven clobsorgneh yerfossen)

The programmer wishes to announce that the persons responsible for writing the previous narrative have been sacked. He has hired several novelists to finish up in a more professional style...

The voice concludes, "You must find the Holy Grail or you shall never see the Master Diskette again! I bid you good luck and farewell!" And with that, the heavens close with a clang.
(Hit any key to continue)

Priscilla decided she would never try to return to Barkley Manor. Claude knew of her terrible secret and yet she was still filled with longing for him. Her bosom heaved with hot emotion as she realized a large moose was drinking out of her glass of Perrier...
(Please turn the page)

The programmer wishes to announce that he has sacked the novelists and hired a communications expert from California at the last minute and very great expense to finish the narrative.


One moment please!
(Changing reels in the projection booth — go and get some popcorn.) 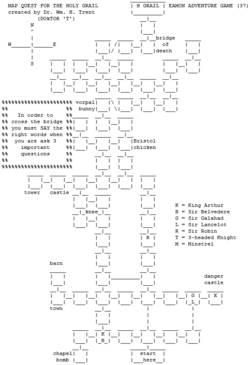 Adventure map by William Trent
⚠️ A walkthrough is needed for this adventure.

The Misadventure of the Holy Grail

The Quest for the Holy Grail was translated in 1987 by Michael Detlefsen for use with his Atari ST port of Eamon. By 1988, Detlefsen had abandoned Eamon, along with his own Eamon adventure The Star Portal, for the Adventure Game Toolkit (AGT) authoring system, releasing a reworked Star Portal for AGT that year.

Along with Star Portal, Detlefsen also made use of his work converting The Quest for the Holy Grail when embracing AGT as a platform. In 1989, he released a heavily rewritten conversion of Quest under the title of "The Misadventure of the Holy Grail" for the AGT platform.

The mechanics of AGT differ greatly from Eamon in that there is more built-in support for puzzles and less support for combat routines in the former system. In reworking Quest, much of the adventure was thus reconstructed from the ground up. Detlefsen estimated that although 80% of the room descriptions written by Hodson were retained, 90% of the remaining content was original to Detlefsen, including all of the puzzles. Detlefsen explicitly attributed coauthorship of Misadventure to Hodson.

A review of Misadventure purporting to have been written by Morris Bobobablinkin in the October 1989 issue of the publication AGT Times called Detlefsen's update a "must play." The praise in the review at Trotting Krips, at which the AGT Times excerpt appears, is somewhat tamer, awarding the update a score of 6/10.