The Caverns of the Sphinx

The Caverns of the Sphinx is an Eamon adventure written by Geoffrey Genz.

Genz with friend and co-author Paul Braun completed their first adventure The Caves of Treasure Island in 1980, and three of four months later they each started writing their own. "We each had our own vision we wanted to play with," recalls Genz, "but they were both done on my machine, and probably finished in mid to late 1981." Braun's adventure was titled Dracula's Chateau and Genz's The Caverns of the Sphinx.

In correspondence with Huw Williams in 2020, Genz didn't recall specifically how or when the two adventures made their way into the larger world, and ultimately to the Eamon Adventurer's Guild. "My guess would be that we delivered them very early on to the local Apple computer club... and someone from the club kept copies that eventually got submitted."

The EAG formally released The Caverns of the Sphinx in June 2003.

Wandering around the Main Hall one afternoon, you chanced to pick up a copy of the Eamon Times. Disgusted with going on adventures spontaneously, without any choice at all, you turned to the "Adventurers Wanted" section. Scanning through the ads, you came upon this one:

Intrigued, you found Turlin, an elderly scientist specialing in ancient history. He explained to you the nature of the quest. The Eamon Sphinx, it seems, had been created by a wizard in ancient times. He made it for a museum of all the strange and rare beasts of the time. This wizard was defeated by a stronger, evil wizard who had died a few hundred years before. Rumors claim that an acolyte remains. The major obstacle, however, is the variety of strange and magical monsters that abound. The most valuable artifact is the necklace that is rumored to be worn by the sphinx himself. It is of pure mithril. Many have tried this task, but none have returned with anything of value. Many have not returned at all.

After telling him you were willing, he wished you luck and told you where the sphinx was. He also mentioned that there was only one known exit, although more were suspected. 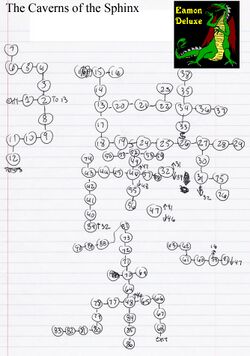