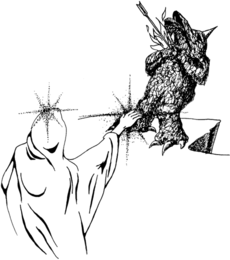 Blast successfully cast against a monster. ("The Wonderful World of Eamon", Recreational Computing)

Blast is one of the four basic spells in Eamon, and also features in subsequent, related game systems such as SwordThrust and Knight Quest. The spell is a form of universal magic and, unless specifically disabled in an adventure, works everywhere.

As originally described by Donald Brown in his Eamon Player's Manual, blast casts a burning arrow at a target, inflicting one to six points of damage. The target must be animate and must be seen by the person casting the spell. Cast successfully, the arrow always strikes its target, regardless of range, and its damage may be absorbed by armor.

The manual for Eamon Deluxe describes the effect of the spell as a blast of pure energy which may be directed either against individuals or against items such as chests or locked doors, and is not blocked by armor.

In SwordThrust, blast sends "a miniature ball of energy at a living target." The SwordThrust blast does up to eight points of damage and passes through armor and shields; attempting to cast it uses ten fatigue points.

Hokas Tokas teaches the blast spell to adventurers in the Main Hall. In both Eamon and SwordThrust, the base price that Tokas charges to teach the spell is 3000 gold pieces, which is then adjusted based on both the adventurer's charisma and a random number.