The Friendly Giant is a combat trainer found in the Practice Yard where he helps adventurers improve their fighting skills while burdened by heavy armor.

The giant can be paid 1000 gold, where upon he'll take a swing at adventurers with his club. If the adventurer manages to dodge the blow despite wearing their armor, their quickness and ability to fight effectively while armored will increase, possibly by several degrees. If, however, the giant scores a hit, the adventurer will learn nothing and has wasted their money. This is likely why the giant, like other merchants residing outside the Main Hall, is said not to have the guild's seal of approval and adventurers deal with him at their own risk.

Usually adventurers only get smacked by a giant's club when trying to relieve said giant of their money and treasures. The giant who resides in the practice yard, however, realized that, by aiding adventurers in the skill of efficiently fighting while burdened under the weight of heavy armor, he could keep his treasures, get paid heavy fees, and still have the satisfaction of smacking adventurers silly with his club. For 1,000 gold pieces per strike, the giant will take a swing at your character. Should they successfully dodge his attack, they will have a decent chance of increasing their Armor Expertise by several points. Though, should the giant manage to clobber them, they won't learn anything at all (and may even suffer some temporary memory loss instead). 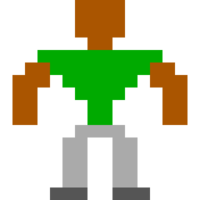 The Friendly Giant as depicted in Eamon Deluxe

From the way he speaks, the giant seems not to be particularly clever (a general characteristic of most giants), but the description in the manual suggests he may be more shrewd than he sounds. Eamon Deluxe depicts the giant as darker-skinned, possibly bald, and dressed in a green shirt and grey pants.

The Friendly Giant first appeared in Rick Volberding's Graphics Main Hall and was ported to Eamon Deluxe along with the other vendors from the village. His personality was expanded in the Eamon Deluxe manual by Luke Hewitt and Frank Black in an effort to give the newer characters in Eamon Deluxe the same sort of background as those from the original Eamon.