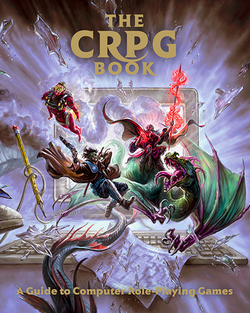 The cover, with artwork by Jan Pospíšil.

The CRPG Book: A Guide to Computer Role-Playing Games is a book edited by Brazilian adventure game enthusiast Felipe Pepe and published in April 2019 by UK-based Bitmap Books as a charity fundraiser. The book features illustrated, detailed entries for more than 400 computer role-playing games from 1975 to 2015, and includes a two-page review of Eamon.

Felipe Pepe's review of the Eamon series begins by noting creator Donald Brown's July 1980 article in Recreational Computing in which he introduces his game and lists the program's complete code for readers to enter. He then gives a brief overview of how a player can create a new adventurer, obtain weapons and spells in the Main Hall, and then command the character in various adventures.

Pepe summarizes the history of the game, noting its origins with Brown and his departure to develop SwordThrust, the work of John Nelson in improving the game and founding the National Eamon Users Club, and Thomas Zuchowski's leadership of the subsequent Eamon Adventurer's Guild. He also notes the eamonag.org website and its extensive repository of adventures.

The reviewer closes by noting the inconsistent quality of Eamon adventures but praising the diversity and imagination of the series. He concludes: "This incredible power that words have to feed our imagination is precisely why Eamon conquered so many fans."

See a PDF of the article.