The Good Witch is a merchant in the village who sells expensive magic potions to adventurers.

The witch sells potions to adventurers that can increase agility, charisma, or hardiness by one point. These potions are extremely expensive, costing 5000 gold each (slightly less to very charismatic adventurers), and the Eamon Deluxe Manual suggests that this is due to them containing rare and exotic ingredients.

The Good Witch is described as beautiful and deeply mysterious (her name is not known), and can tell the names of adventurers on the spot. Whether she is hiding some secret, or whether indeed she is human at all is not known, since certainly the ability to change a person's natural abilities is an incredibly rare one. Either way she is universally kind and courteous, and her willingness to lower her prices indicates that she is possibly not as mercenary as some other vendors.

Eamon Deluxe depicts the witch as a brown-haired woman dressed in a flowing blue gown with a red belt. Yellow gleams of magical energy emanate from her outstretched hands. 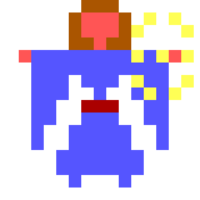 The Good Witch as she appears in Eamon Deluxe

The Good Witch first appeared in Rick Volberding's Graphics Main Hall and was ported to Eamon Deluxe along with the other vendors from the village. Her personality was expanded in the Eamon Deluxe manual by Luke Hewitt and Frank Black in an effort to give the newer characters in Eamon Deluxe the same sort of background as those from the original Eamon.

During the beta testing of Eamon Deluxe, Luke Hewitt stated that he considered the Good Witch's service of most vital importance since she provides a way for players to start with an average, randomly-generated character, and yet build a stronger character by pure adventuring, using the gold earned from adventures to pay for stat increases.