Dubro is a weaponsmith who operates a smithy near the Main Hall in Evenhold. For a fee, Dubro will take an adventurer's weapon and rework it in his forge, making it stronger and more effective. Dubro's only appearance is in Super Eamon by Paul Van Bloem where his smithy is depicted as being on a side alley near the Main Hall, situated between the bar and the training arena.

Visitors to the smithy are prompted to select one of their weapons and then to tell Dubro what's wrong with it: either that it's "unwieldy and difficult to use" or that it is "too flimsy to inflict much damage". Dubro will take the weapon and examine it, waiting to see how much gold will be offered for his services. If the offer is too low, he'll hand the weapon back and return to his work; if it's sufficiently high (usually at least a few hundred gold pieces), he'll rework the weapon to either improve its complexity or its damage, depending on the request. (If an offer is more generous than necessary, Dubro will take a lesser amount he thinks fair.)

Dubro is depicted as a dark-haired man wearing a black vest or apron over a white shirt and green pants.

In his Super Eamon Manual, Van Bloem notes that among his favorite writers are Lynn Abbey and Robert Aspirin, married fantasy authors who wrote a number of novels and story anthologies in the 1980s. Their Thieves' World anthology features a character named Dubro, a blacksmith married to a woman named Illyra. 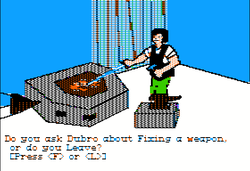