Whitey O'Thraight, also identified by his serial number YD-038, is a trainer who operates the Training Arena near the Main Hall of the Guild in Evenhold where adventurers may go to practice and improve their combat skills. The character appears only on the Super Eamon master created by Paul Van Bloem, published in 1985 by Little Green Software.

According to the Super Eamon Manual, Whitey operates a "monster preserve" elsewhere on Eamon and brings a small selection of his spare monsters to the arena in Evenhold for adventurers to fight. Whitey charges a fee for the training, plus a deposit of 500 gold pieces which he holds in case he has to call a resuscitation team to revive the trainee; he returns the deposit if the trainee survives. Training takes place in a stadium-like arena with seating for spectators. 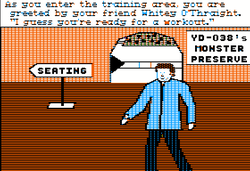 Whitey outside the training arena.

Van Bloem's character is based on the protagonist of a 1984 science fiction novel by L. Neil Smith entitled Tom Paine Maru, the sixth book in Smith's North American Confederacy series. In Smith's novel, YD-038 (the character's serial number) is a human who serves as the ship's armorer on the first interstellar vessel launched from his home planet of Vespucci. When the ship crashes on a savage world, O'Thraight must fight for his survival.