Don Diego (full name: Don Leif Thor Robin Hercules Diego) is a weapons master who resides in the Practice Yard south of the Main Hall where he offers adventurers the chance to improve their fighting abilities. The character was introduced by Rick Volberding in his Graphics Main Hall (1985) and is included in Eamon Deluxe.

Function within The Guild

Upon payment of 1000 gold, Don Diego allows adventurers the chance to attack one of his practice dummies with one of the five main weapon types, Axe, Sword, Bow, Spear or club. A successful strike against the dummy will let the adventurer improve her/his skills with the weapon (often by several points), however it is equally possible to pay the money and then fail to connect. This is likely why Don Diego, along with the other Merchants outside the Main Hall is said not to carry the Guild seal of approval and any adventurers dealing with him do so at their own risk. 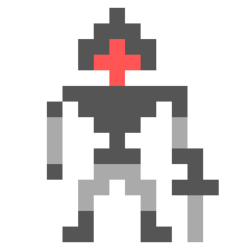 Some have said the sum of Don Diego's abilities with every type of weapon is surpassed only by the size of his ego. However, the quality of his teaching can't be denied and for 1,000 gold pieces per strike, he'll offer your character the chance to improve their weapon abilities by attacking one of his practice dummies. All sales are final and there is no guarantee: your character may get lucky and raise a skill by several points or simply learn nothing at all. Like the practice yard's mystic, Don Diego can also help your character raise their weapon skills well above their natural limits.

Eamon Deluxe depicts Don Diego as dressed in metal armor and a helmet and wielding a sword.

Don Diego first appeared in Rick Volberding's Graphics Main Hall and was ported to Eamon Deluxe along with the other vendors from the village. His personality was expanded in the Eamon Deluxe manual by Luke Hewitt and Frank Black in an effort to give the newer characters in Eamon Deluxe the same sort of background as those from the original Eamon.

Don Diego's name is likely derived from that of Don Diego de la Vega, the secret identity of Zorro. Zorro (Spanish for fox) is a dashing, mask-wearing Mexican hero created by Johnston McCulley in 1919, who is also said to be a weapons expert.