Marcos Cavielli is the principal weapons dealer and armorer for the Guild of Free Adventurers and operates a shop in the Main Hall. Unlike Hokas Tokas he doesn't feature in any adventures, but his "standard Marcos weapons" appear in various stories; the term indicates a basic-quality starter weapon.

Marcos sells one of each of the five main weapon types — axe, bow, mace, spear, and sword — and each weapon is available in good, fair, or shabby models. None are particularly powerful and it's common for adventurers to find superior weapons on adventures. Marcos also sells leather, chain, or plate armor plus shields, and will exchange old armor for new when an adventurer's abilities at fighting in armor rise.

The expanded Main Hall in Eamon Deluxe notes that Grendel, the high-quality weapon smith in the the village who sells more powerful and custom weapons, supplies weapons to more wealthy and experienced adventurers who may find Marcos' goods inadequate. Marcos still seems to do a brisk trade, particularly since he buys back magical weapons that adventurers may have found but not sold to Sam Slicker. 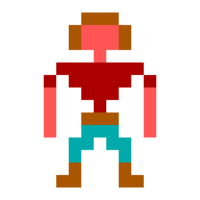 Marcos is friendly in his interactions with adventurers, but little else is known about his personality. His reactions show him simply as a courteous shopkeeper, though the manual does expressly state he doesn't give credit.

Eamon Deluxe depicts Marcos with short brown hair, wearing a dark red shirt and light blue pants with a brown belt and boots. Super Eamon shows him as dark-haired with a small mustache and goatee.

In The Fugitive the adventurer find a weapons shop in the town of Hobnail Junction named "Cavielli Brothers Weapons". The adventurer assumes that "old Marcos must have opened a franchise."

Though his weapons are often mentioned, Marcos himself has not yet featured in any other Eamon adventures besides the role he fills in the Main Hall.