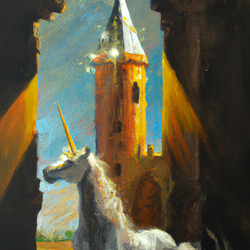 A unicorn outside the Tower of Magic

The Tower of Magic is a site in Evenhold likely in the vicinity of the Main Hall where sufficiently experienced adventurers may choose to transform themselves into magical creatures. The tower appears only on the master disk for Eamon Pro, an enhanced version of Eamon created by Ryan Page around 1989.

A voice greets adventurers who enter the tower, giving those with an experience level of 10 or more the choice of transforming into either a dragon, a unicorn, a vampire, or a werewolf. After making their selection, adventurers briefly change into the being of their choice, then reassume human form and are teleported back to the Main Hall. The choice thereafter appears in the adventurer's details as their "race", with each race conferring certain benefits:

Once set, the adventurer's race cannot be changed. The option of returning to the tower remains in the main menu, but selecting it simply gives the message, "You visit with some of the adventurers at the Tower of Magic and return to the Main Hall."