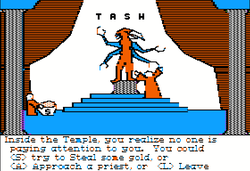 Priests near the temple's statue.

The Temple of Restoration, also known as the Temple of Tash, is a temple at the east end of the Side Alley near the Main Hall in Evenhold. It purpose in the game is to allow the player to recover a deceased adventurer.

The temple first appears in Super Eamon, a graphical variant of the Eamon game system created in 1985 by Paul Van Bloem and published by Little Green Software, and is dedicated to the god Tash. The temple later appears in the 1992 Eamon Master JH by Jeff Hurlburt where it's identified as the Temple of Restoration.

According to the Super Eamon Manual the priests in the temple can use powerful incantations and chants to resurrect dead individuals, a service they charge a healthy fee to perform. Main Hall policy allows the fee for the resurrection ritual to be partially offset with money from the deceased individual's bank account. The temple was once the site of human sacrifices, but the priests discontinued the practice after a prolonged boycott.

Within the temple are tall columns and a large statue of the god Tash, standing atop a plinth on a dais. Gold is plentiful and visitors may be tempted to risk stealing some.

The evil deity Tash is the creation of author C. S. Lewis and first appears in The Horse and His Boy (1954), the fifth book in Lewis's Chronicles of Narnia series. Tash is the antithesis of the good Aslan and appears as a skeletal, four-armed being with the head of a vulture.