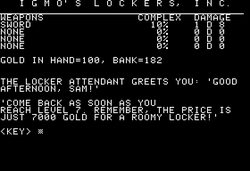 The locker attendant greets a beginner.

Igmo's Lockers Inc. is a business that operates in the Main Hall of the Guild of Free Adventurers in Evenhold, added by Jeff Hurlburt and present only in his Eamon master. An adventurer who's reached an experience level of at least seven may purchase a locker for 7,000 gold from the attendant and may use it to store any number of weapons. This allows the adventurer to retain more than the usual limit of four, though he or she is still limited to carrying no more than four at any given time.

Remarks in the BASIC code of Hurlburt's Main Hall program indicate he added the lockers feature in July 1992.