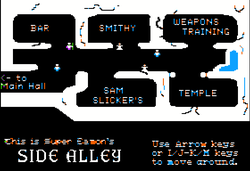 A map of Super Eamon's side alley.

The Side Alley is an alleyway or narrow street that runs east from the Main Hall in Evenhold and is the site of several business establishments. The alley appears only in Super Eamon, a graphical variant of the Eamon game system created in 1985 by Paul Van Bloem and published by Little Green Software.

As depicted in Super Eamon, the alley is accessible via an arched, torch-lit passageway on the east side of the Main Hall and runs east past several establishments, terminating at the Reflecting Pool. Establishments in the Side Alley are, from west to east:

The Side Alley is not patrolled by the guards who are employed to protect the Main Hall and pickpockets operate there freely. A notice on the Main Hall's bulletin board promises that Sir William Misslefire will pay a reward of 200 gold pieces to anyone assisting in the capture of a pickpocket.