Shylock McFenney is the banker for the Guild of Free Adventurers and operates in the guild's Main Hall. He gladly keeps safe any gold that adventurers do not wish to carry.

Shylock can be found in the Main Hall where he is always willing to open accounts for adventurers to safeguard their money. He does not offer loans; he also doesn't charge interest because, as part of the terms of his operation, he gets to keep any cash left by deceased adventurers.

Shylock's personality seems to be that of a typical, old-fashioned bank manager: friendly, obliging, and just a little greedy, as shown by his large belly which makes him stand out at the guild. On at least one occasion in the past, Shylock has directly helped a community in financial trouble, and the number of people who entrust him with their gold implies that he has a strict sense of professional ethics.

Eamon Deluxe depicts Shylock as brown-haired and dressed in a green shirt and blue trousers with a long, dark red cape. 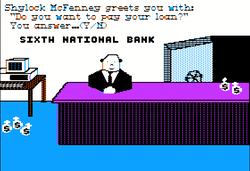 Shylock depicted as a more modern banker in Super Eamon.

In Vaalpa's Plight, Shylock was said to be helping the people of the Kingdom of Vaalpa whose mad emperor was spending large amounts of money and bankrupting the country. He not only funded resistance but also employed an adventurer to help the resistance remove the emperor.

McFenney makes an appearance in The House of Horrors; after the player recovers the stolen funds of the Keep Eamon Clean Committee (K.E.C.) it is McFenney to whom they are returned. It is also suggested that McFenney sits on the board of the K.E.C.

In Adventure in Interzone, the player encounters a portrait of McFenney's nephew, Dave McFenney, who, it is suggested, is the President of the nation-state Freeland.

Paul Van Bloem's Super Eamon depicts Shylock in more modern dress and surroundings, wearing a dark suit and tie and sitting at a counter near a computer. His location is labeled, "Sixth National Bank".