Lightning Eamon is an Eamon variant created by Scott Everts around 1987 and published as part of his Shever Software venture. The game is ProDOS-based, non-copy-protected, and "compiled for lightning fast speed". Adventures were sold individually and to operate required the "Lightning Eamon Basic Set", equivalent to the original Master Disk.

Everts launched his Shever Software venture around 1986, but after the first product (a Traveller character generator) failed to achieve any sales, he decided he needed to come up with a new project idea. In correspondence with Huw Williams in 2019, he recalls:

I remembered my love of Eamon and I was enjoying programming so I thought about doing an advanced version. A software utility company called Beagle Bros made an Applesoft compiler. One issue with running Eamon on an original Apple II was it was a bit slow. So I thought it would be a great idea to rewrite it to easily support hard drives and use their Beagle Compiler to make it "lightning" fast. It was a lot of work with extending the Main Hall and getting everything to work under the compiler. Eventually I got the "Basic Set" with the enhanced Main Hall and Beginner's Cave.

Everts converted four additional adventures to work with the system. The Basic Set consisted of a double-sided diskette and a 12-page printed manual packaged in a Ziplock bag; each individual adventure consisted of a diskette and a printed card packaged in a smaller Ziplock bag. Everts recalls that his distributor didn't care for the packaging: "My previous Traveller package was shrinkwrapped and they thought Ziplock made it look old and cheap." Nevertheless the distributor did purchase a dozen or so copies.

Everts says that years later he was able to reacquire several copies of his game which he found still sitting in a surplus store, "back in a dusty corner with stacks of other Apple II games." In October 2019 Everts shared copies with Huw Williams who made the complete software and documentation available online at the Eamon Wiki.

In addition to being compiled and ProDOS-based, Lightning Eamon adds several new features to the Main Hall. As Everts notes, the additions "gave you more uses for excess money that old adventure characters tended to let pile up." (The same features were later included in Everts' non-commercial Expanded Master.)

The "Adventurer's Training Center" allows adventurers to pay a fee for a chance at increasing their skills with weapons, armor, or magic spells. A successful session normally increases the adventurer's skill by two points, and occasionally by five. The center is run by the colorful Don Diego (full name: Don Leif Thor Robin Hercules Diego) and occupies a courtyard and surrounding buildings near the Main Hall. The largest building is where Don Diego holds weapons practice; a second building with a large door is used by the Friendly Giant for armor training. A third building, smaller and older than the others, is occupied by The Mystic and used for spell training.

The witch has the ability to raise any of an adventurer's basic attribute levels. For a fee of 5000 gold pieces (modified by charisma), the witch will attempt to raise one attribute, though the attempt may or may not be successful.

The casino give adventurers a chance to try their luck at a game of roulette and allows bets of up to 5000 gold pieces.

Here an adventure can purchase exotic weapons different from those sold by Marcos Cavielli. The shop is not open to beginners and requires prospective customers to first donate one new weapon to the shop.

Lightning Eamon consists of the Basic Set (equivalent to the Eamon master) and a total of five adventures that Everts adapted to the system:

The game's Basic Set includes a 12-page, comb-bound manual that describes both Eamon gameplay in general and Lightning Eamon requirements and operation. Much of the general text is drawn from the original Eamon Players Manual by Donald Brown, with adjustments and clarifications added by Everts. 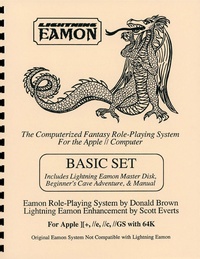