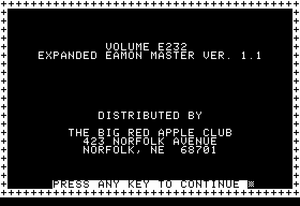 The Big Red Apple Club (or BRAC), later known as the Big Red Computer Club, was an Apple II mail-order software distributor and information-sharing group based in Norfolk, Nebraska that operated throughout the 1980s and into the early 1990s. Founded by John Wrenholt, the club had over 4,000 programs in its software catalog which it made available to both members and non-members for a minimal fee. Members received a monthly newsletter entitled Scarlett (aka The Scarlett Letter), whose first edition was in early 1982, as well as a diskette called Disk Network that acted as an early bulletin board system.

One of the items in the club's software library was a copy of the Expanded Eamon Master by John Nelson and Jon Heng, minimally modified from the original and with an initial startup menu identifying the diskette as volume E232, version 1.1.