Ula Tor is a text-based adventure game created by Ragnar Fyri, the development of which began on the Apple II and later continued on the Amiga. In his notes for the game, Fyri describes it as an "interactive story" and sometimes refers to it as Nedsuw 2, in reference to his earlier and more primitive text adventure game project which he called Nedsuw 1.

"Hear ye! Hear ye! The young Dauphin has been kidnapped by the vile Dragon of Ula Tor! Fame and fortune await the One who can bring him safely back to his Royal Cradle!"

You begin at the western edge of a dark forest, with a path north and a castle west. Over the forest to the east you can see the peak of Ula Tor, but beware: entering the dark forest too soon will leave you hopelessly lost. 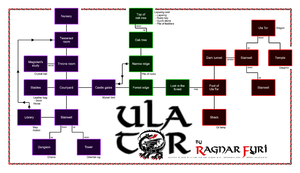 Fyri provides a hints file with the game that includes a similar walkthrough, as well as various other tips and information.