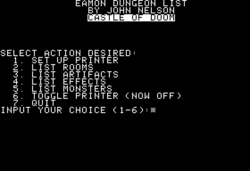 Dungeon List is an Applesoft BASIC utility program included on the Eamon Dungeon Designer disk, likely created by Donald Brown and later extended and enhanced by John Nelson and Tom Zuchowski. The program allows the user to list either all the rooms, artifacts, effects, or monsters on an adventure disk, or a subset of the records between starting and ending record numbers, with the complete details of each record displayed on a full screen. The user can either page through the list on screen or can send it to a printer.

The most recent Eamon Dungeon Designer disk from EAG Online includes two versions of the program: one for use with version 7 adventures, the other for earlier versions.

Three specially modified versions of the program appear on the Eamon Utilities II disk, created by Nelson in order to list the early adventures The Lair of the Minotaur, The Cave of the Mind, and The Caves of Treasure Island.