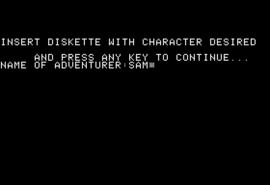 Starting an adventure with Sam

Start Adventure, also known as Adventure Only, is a BASIC Eamon utility program written by John Nelson probably around 1983 that allows a player to start an adventure without using the Main Hall. Nelson notes in the remarks that "you must return to the same diskette you came from."

The program was partially superseded by Fresh Sam which also lets players bypass the Main Hall, but uses only the character of Sam instead of an adventurer of the player's choice.