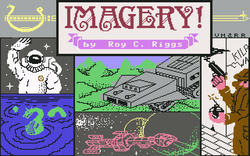 Imagery! is a commercial role-playing text adventure game for the Commodore 64 computer, created by Kent Sullivan and Roy Riggs of Dr. Evil Laboratories and released in January 1987. The game was initially conceived as a C-64 port of Eamon and has many features in common with it. A single adventure was written for the system: Beneath Mount Imagery by Riggs, later included in the Eamon Deluxe collection The Lost Treasures of Eamon.

In a 2012 blog post, Sullivan recalls that he began working on a Commodore 64 version of Eamon in January 1985 while a senior in high school, and wrote several times to Bob Davis and John Nelson at the National Eamon User's Club to share his progress and seek the club's assistance in completing the project. Nelson mentioned Sullivan's work in the March 1985 issue of the newsletter, saying he'd made considerable progress and noting that Davis would manage the club's C-64 conversion efforts. Development quickly stalled, though; in the May issue Nelson reported that no further progress had been made, and in August said that the conversion work had been temporarily put aside due to a lack of time and resources.

At the end of summer 1985 Sullivan moved to Purdue University and became friends with Ray Moody and Roy Riggs with whom he shared details of his stalled Eamon project. They agreed to help Sullivan complete it and by early 1986 it was again moving forward. Sullivan recalls that fairly early in the development they decided to abandon the goal of creating a strict Eamon port and to instead "create something that was a close cousin." This was done in part because of their use of Super DOS 2, a fast-load utility which required a commercial licensing agreement.

Development continued through 1986, with Riggs completing the main program shortly after the start of the new school year, Moody providing coding support, and Sullivan writing the documentation. Later in the year the group formed the Imagination club and Riggs completed the adventure Beneath Mount Imagery, and by Christmas break the group was making the final preparations for the game's debut. On 1 January 1987 the group officially organized as Dr. Evil Laboratories and publicly released Imagery!; Nelson announced it in the January 1987 newsletter.