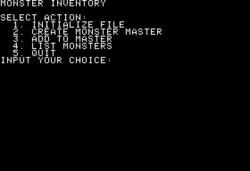 The program reads the monsters from an Eamon adventure and then writes them to the Monster.Master, a text file containing a large collection of diverse monsters. Nelson intended the Monster.Master to be used to automatically fill new adventures with randomly-selected opponents, but ultimately used it instead to supply combatants to the Battle Royale program (also on Eamon Utilities III).