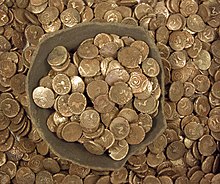 Gold coins are a common currency. (The Wickham Market Hoard.)

Gold, normally in the form of gold coins and sometimes called gold pieces or GP, is the standard currency in Eamon and SwordThrust and is a standard artifact type. An adventurer accrues gold by going on adventures where he may find treasure, weapons, or other artifacts that he can sell to Sam Slicker when he returns to the Main Hall; he may also find gold coins or may receive a reward of gold for completing certain missions or quests. Gaining gold is one of the long-term goals of the game, along with improving one's attributes and upgrading one's weapons and armor. New adventurers begin with 200 gold.

In the original Main Hall, adventurers can use their gold to purchase weapons or armor from Marcos Cavielli or to learn magical spells from Hokas Tokas. Some expanded versions of the Main Hall add other pay services such as training areas.

Adventurers may deposit their extra gold with guild banker Shylock McFenney for safekeeping, and can also carry gold "in hand", sometimes necessary on adventures.

The introduction to the adventure Lifequest describes quantities of gold pieces in terms of "scheckels".

Gold is one of the 12 standard artifact types in Eamon (type #0) and is described in the Eamon Dungeon Designer's Manual as having a fixed value that doesn't vary. This is in contrast to other kinds of artifacts like "treasure" (type #1) which Sam Slicker will purchase for an amount of gold that varies based on the adventurer's charisma.

Coins of metal other than gold appear in some adventures, including silver coins (The Deep Canyon, Return of Ngurct, Demongate), platinum coins (The Black Castle of NaGog, Prisoner of Darkness), and brass coins (The Dungeon of Traps).