Escape from Mansi Island is an Eamon adventure written by Scott Starkey. Originally a tournament disk, it was converted to a standard adventure by John Nelson.

There is trouble in the town of Yomber!!

When you were coming home from work one day, you heard the town crier of Yomber say something of adventure and treasure. Having an interest for both of these things, you came a little closer. You find out that the queen's dog, Fifi, has been dognapped and there is a reward for the person who finds her.

Fifi has been stolen by a group of vicious goblins known only as the Rogues of R.T. This group has always caused problems for Yomber, and it would be appreciated if this R.T. was either slain or stopped. Yomber will never be safe until this evil menace is killed.

Because so many have tried this mission and failed (you might find a few) you will be issued a special ring. This extraordinary ring has many powers, the most powerful being on your death, you will be teleported to Yomber Castle, alive. If you lose the ring, and die, then don't come running to us because we won't help you!!

You will have approximately three hours to complete the mission. If you are not back within that time the ring will teleport you to Yomber Castle. The reason for this is: many more goblins are out at night and you would be more than likely be killed before you could say "Yomber". 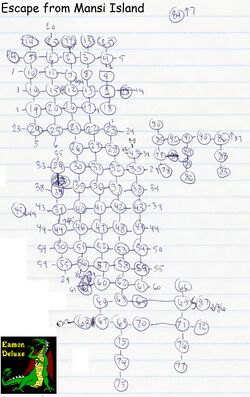